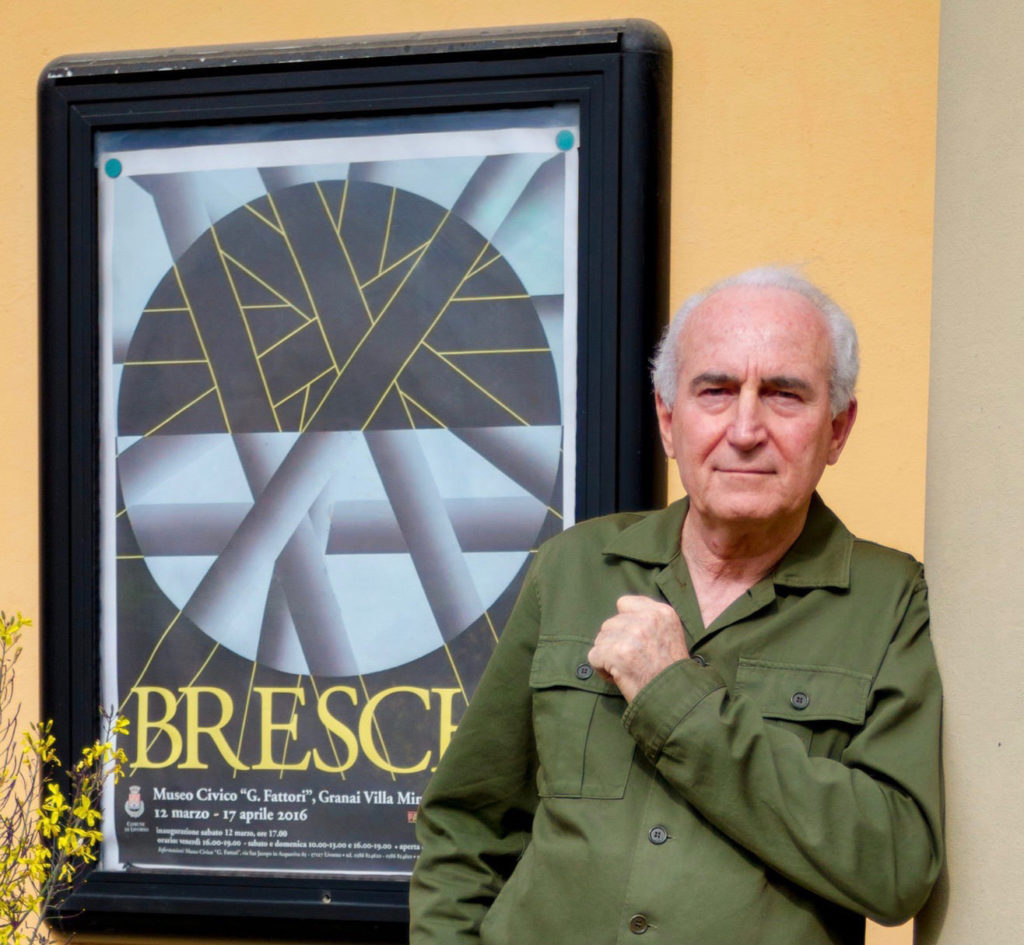 International painter/sculptor Fabrizio Breschi was born in Livorno, Italy in 1950.  Livorno greatly influenced Breschi’s art from childhood. He expressed reality through architectural-geometric shapes transformed into industrial landscapes, surreal seascapes, and robots. There is something both familiar and uncanny about the robots Breschi created over 40-years ago and the role robotics play in our daily life today. “I amused myself depicting the human race in the guise of robots, adding a surreal note to observed daily activities. I sought to glimpse the ultimate destiny of a technological society.” Breschi’s robots ride the Paris metro, they dine, they kiss, a red-eyed baby cries in its crib, and a robot holding a daisy has his arm around an “artifact” Cycladic woman.

In April 2018, his robots were a feature at the First International Conference on Soft Robotics sponsored by the world renowned Pisa Biorobotics Institute.

Breschi has a long and rewarding career in the arts. He graduated from Liceo Artistico, Florence, and the Florence Academy of Fine Arts where, at the age of 23, he became an assistant professor. At 35, Breschi was the youngest professor-lecturer in the history of the prestigious Brera Academy, Milano, to hold the painting chair – truly a great accomplishment.

In 2007 Breschi retired from teaching to immerse himself in painting and sculpture. He works from his studios in Livorno and New York, layering matte, acrylic paints to resemble polished chrome, creating gleaming tubes that course between canvases like elaborate mechanical systems – a 3-dimensional sculpted-effect that is his signature technique. “My pleasure derives from the difficulty involved with obtaining those hues with a brush, a process where I challenge the technological means developed in our time.”

He has exhibited in solo and group exhibitions in Italy, France, Spain, Germany, Switzerland, Greece and the United States. His work is in museums and corporate and private collections. His multi-media sculpture Cycladic Today is on the facade of the Goulandris Foundation Museum of Cycladic Art, Athens. Love Story, a 25-foot tall metal sculpture stands in the Piazza della Vittoria in central Livorno. A smaller metal sculpture, Twin Towers is in the garden of the Fondazione Trossi Uberti  Museum, Livorno. Rising Sun, a light sculpture in plexiglass, was chosen by the Museo della Citta (City Museum of Livorno) for their exhibition: Progressive Visual Arts in Livorno from 1989 to 2020. He felt honored to be a part of this exhibition of notable artists. It was a very important exhibition for the history of Modern Art and the museum is publishing a book of the exhibition.

Breschi was honored by his hometown city with a retrospective exhibition of his work at the Museo Civico G. Fattori: BRESCHI: 1976 – 2016. Fellow artists,

ex- students, art critics and friends celebrated with him. He is truly an artist 40-years ahead of his time.

Any cookies that may not be particularly necessary for the website to function and is used specifically to collect user personal data via analytics, ads, other embedded contents are termed as non-necessary cookies. It is mandatory to procure user consent prior to running these cookies on your website.